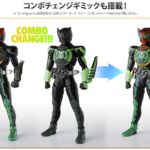 In case you missed it, Bandai announced the next S.H.Figuarts Shinkocchou Seihou release last night will be none other than Kamen Rider OOO himself, a character long awaited by many collectors and fans in the community and one whose original S.H.Figuart release did not age particularly well.

In the scan that we saw last night, we saw the TakaKiriBa combo form figure and thanks to some additional images that have come out since then we now know that this will not be an entirely separate figure, but it will be able to do combo changes by swapping parts with any future releases!

This seems to suggest that an S.H.Figuarts Shinkocchou Seihou Kamen Rider OOO GataKiriBa Combo may be coming our way in the not so distant future, but nothing’s been confirmed as of this writing.