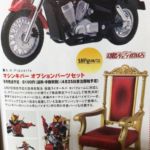 With the long-awaited(and long memed) S.H.Figuarts Shinkocchou Seihou Kamen Rider Kiva due out for release later this month,  the time to is ripe to release an accessory pack to accompany him, and where would a Kamen Rider be without his trusty bike?

In the latest round of scans, we have new release info for the S.H.Figuarts Machina Kivaa accessory pack: the set will retail for 8100 yen and will release in September 2019 as a Tamashii Web Shop limited item. Also included in this set is a chair and Bloody Rose accessories. Pre-Orders will be opening April 25th, 2019 to coincide with Kiva’s release so we’ll be sure to update you once the link is available.