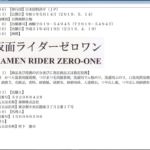 Toei has officially filed a trademark for the next Kamen Rider series!

Zero-One represents a new beginning for Kamen Rider- this will be the first Rider series starting in the Reiwa Era of Japan, under Emperor Naruhito.

Sadly, no other information about Kamen Rider Zero-One has been revealed at time of writing. Stay tuned to Tokunation for all Kamen Rider news!