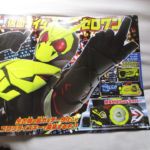 We are growing closer and closer to the premiere of the first Kamen Rider in the Reiwa Era and to mark the occasion we now have our first batch of magazine scans starring Kamen Rider Zero-One!

Zero-One lives in a world where humans share their existence with androids known as HumaGear. While most exist peacefully, there is a terrorist group known as MetsuboJinrai that insists HumaGear are superior to organic beings and use their abilities to force android bodies to attack civilians.

The A.I.M.S. force exists in this world to protect humans from attacks- led by the Rider duo Kamen Rider Vulcan & Kamen Rider Valkyrie! Vulcan uses the ShootingWolf Progrise Key while Valkyrie holds the RushingCheetah Progrise Key. Vulcan is described as a “wild fighter” while Valkyrie’s abilities are more precise.

Kamen Rider Zero-One is officially scheduled to begin on September 1st 2019! Stay tuned to TokuNation as we keep you up to date on this remarkable new series!