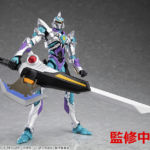 Good Smile Company have announced a new version of their DX Full Power Gridman figure set at the currently ongoing Tsuburaya Convention 2019. This new version of their fully combinable set will feature the titular Hyper Agent in the “Initial Fighter” colours that appeared in the show’s first episode, along with his four Assist Weapons in new uniform black, blue and silver colourschemes.

As before this set will be able to transform between all modes that appeared in the show, including Max Gridman, Buster Gridman, Sky Gridman, Powered Zenon and of course Full Power Gridman.

More information about this set is to be revealed soon, but in the meantime please check out the full range of images after the jump as well as Tokunation’s own gallery of the original DX Full Power Gridman set.