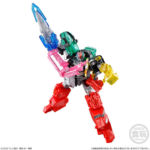 The premie of Mashin Sentai Kiramager is right around the corner, and a new assortment of Minipla will be arriving with it. Bandai is hitting the ground running with our very first look at the Minipla Kiramazin model kit.

The case assortment hasn’t been disclosed, but we do know that Minipla Kiramazin will be dropping in March 2020 retailing for 2160 yen. An all-clear version of this kit was also revealed, but that model appears to be tied to some sort of campaign event, so whether or not it will hit P-Bandai isn’t known at this time.