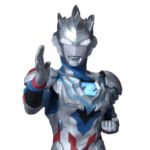 Tsuburaya Productions have released new information about the newest instalment in the Ultra Series – the forthcoming Ultraman Z!

Celebrating the 10th anniversary of Ultraman Zero, the series will feature Zero’s student as the titular hero. Ultraman Z will be voiced by Tasuku Hatanaka (Kabaneri of the Iron Fortress, My Hero Academia) and assumes the human guise of Haruki Natsukawa, played by Kohshu Hirano.

Beta Smash – a wrestling-style form using the medals of Ultraman Ace and Taro.

Gamma Future – a psychic-powered form using the medals of Tiga, Dyna and Gaia.

Also making a return in the series is Riku Asakura, aka Ultraman Geed! Geed will also be able to transform using the Z Riser, card and medals – assuming the new form of Galaxy Rising! This form combines the medals of Ginga, X and Orb!

Ultraman Z begins airing in Japan on June 20th 2020! Check out the trailer below as well as the cast comments in the full Tsuburaya release!