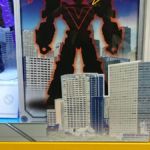 Some new listings have recently been posted online for the next wave of Mashin Sentai Kiramager toys!


But the biggest item in the listing is a DX GigantDriller! Based on previous rumors, this particular DX release is said to belong to Kiramagers’ as-yet-unrevealed Sixth Ranger.

A silhouette of a new Kiramager Mecha was recently revealed alongside toy displays in Japan- could this be the GigantDriller in question? Only time will tell!

Be sure to join in our Ongoing Kiramager Rumor Thread to share your thoughts & fears about this exciting new series!