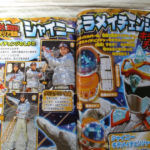 At last we have our first look at the sixth member of Mashin Sentai Kiramager!

This is Kirame Silver– the Piercing Shining hero! Kirame Silvers’ true identity is a young man named Crystallia Takamichi who travels the world hunting for treasure and recording his adventures in a special journal. Using the Shiny KirameChanger Takamichi can monitor locations where treasure is found.

The Kiramagers’ will also face a new enemy after Silvers’ arrival- the MonStone, a sentient KirameStone that can merge with humans to cause tremendous destruction.