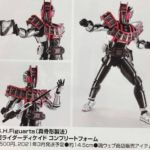 New magazine images have revealed that Kamen Rider Decade Complete Form will be joining the S.H. Figuarts Shinkocchou Seihou line next year! The final form of the 10th anniversary Heisei Rider will include his Ride Booker in carrier, sword and gun modes, with any further accessories yet to be revealed.

The figure will be released as a Tamashii web exclusive in March 2021, with a price tag of 7500 yen. Official images are yet to be released, but stayed tuned to Tokunation and we’ll update you as soon as they are!