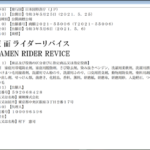 A new trademark has been filed for the next Kamen Rider series!

The third Rider of the Reiwa Era will be known as Kamen Rider Revice!

With current series Kamen Rider Saber apparently entering its final act, we should be learning more about this new hero in the near future.

Stay tuned to TokuNation for further details on this new chapter in Kamen Rider history!