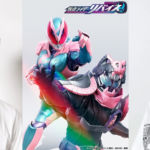 Toei has updated their official site to introduce the third Kamen Rider of the Reiwa Era– Kamen Rider Revice!

Kamen Rider Revice is the story of a young man who makes a deal with the devil. The sinister Dead Man Cult has developed a device called the Vice Stamp to awaken the demons within humans- which they call Deadmen. Our hero is named Ikki Igarashi– he strikes a bargain with the demon Vice to use the Stamp power & save the world- transforming both into Kamen Rider Revi & Kamen Rider Vice!

Ikki will be portrayed by newcomer Kentaro Maeda, while Vice will be voiced by Subaru Kimura (who is perhaps best known to toku fans as the voice of the Seiza Blaster in Uchu Sentai KyuRanger.) Outside of battle, Ikki will receive support from his younger siblings Daiji and Sakura– played by Wataru Hyuga & Ayaka Imoto respectively.

The head writer of Kamen Rider Revice will be Hanta Kinoshita a newcomer to the tokusatsu world. Longtime Rider director Takayuki Shibasaki will return to helm the series. Music will be composed by Kotaro Nakagawa another Rider veteran.

Toei has scheduled the first Kamen Rider Revice press conference for July 27 2021. The series itself will begin on September 5 2021! Stay tuned to TokuNation between now & then for further updates on this new chapter in Kamen Rider history!