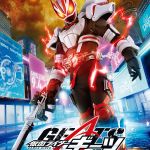 The official TV-ASAHI page for the next Kamen Rider series, Kamen Rider Geats has been opened- sharing the full story of this new hero!

Kamen Rider Geats’ true name is Ukiyo Hidetoshi– also known by the nickname Ace. At one point, this man joins a contest known as the DESIRE GRAND PRIX– a contest where players transform into Kamen Riders and battle the dangerous JAMATO creatures. The winner of the Desire Grand Prix gains the right to reshape the world based on what their heart desires.

Each Rider will gain points in the Desire Grand Prix by battling and defeating Jamato. At time of writing, Geats is the only Kamen Rider revealed for the series- but rumors suggest there may be as many as EIGHT Riders participating in the Grand Prix.