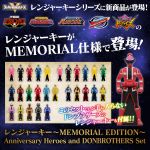 It looks like Ranger Keys are back – and for fans of the current Sentai DonBrothers – hold on to your wallets!

Premium Bandai has revealed a brand new set of Ranger Keys – Memorial Edition Anniversary Heroes including DonBrothers Set.  This set celebrates DonBrothers as well as the anniversaries of some Super Sentai series:

28 total pieces in this set.