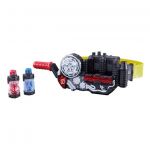 It has been five years since Kamen Rider Build aired and became a top tier level show and toy line for fans and collectors alike.  With the release of new Kamen Rider Build DX items (see here), Bandai has chosen to re-release the DX Build Driver and some of the harder to find DX accessories in the Super Best line – DX Hazard Trigger, DX Full Rabbit Tank Bottle, and DX Cross-Z Dragon!

Team Kamen Rider announced these items will also be available to order in the US.

Site sponsor Tokullectibes has the Japan release available for pre-order now.  These items are considered part of the Super Best series, which gives them new packaging but retains the original release item.  Check below for the links.

The Japan release is scheduled for March 2023.