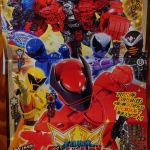 King-Ohger begins in the world of Chikyuu– which has five kingdoms. The leaders of each kingdom have gathered for thousands of years to protect their land as the Ohsama Sentai- with powers granted by the Kings Weapon that can take new forms for each wielder.

Aiding the King-Ohgers in their battle against the Earth Empire Bugnarok are the Shugods! Powerful mechanical insectoids worshipped across Chikyuu, these new forces unite!

When all TEN of these Shugods combine, they create an almighty Mecha- The King Ohja!