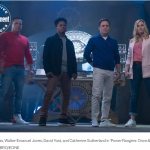 Titled Mighty Morphin Power Rangers: Once & Always this special episode delves into Ranger history and brings some old faces back for a new adventure.

Some voice actors will also be returning for this special- including Barbara Goodson as Rita Repulsa and Richard Horvitz as Alpha 5.

A making-of video for the anniversary project was also released-

Mighty Morphin Power Rangers: Once & Always will be released April 19 2023 on Netflix!