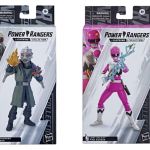 The next Lightning Collection will consist of-


This wave is currently slated for release in June 2023.

A special two-pack release of the Mighty Morphin Tenga Warriors was also announced as an online exclusive for Summer 2023.

The next Zord Ascension Project release- the In Space Astro Megazord was on display for a bit, demonstrating the scale between this and the previously released Dino Megazord.