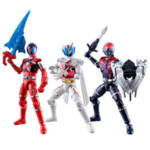 Remember those awesome Kyuranger figures Bandai’s been teasing us with all month? Our friends over at HLJ and AmiAmi  just put them up for pre order. With that, we now have a release date and pricing.

This new line will be dubbed Kyuranger Yuudou, the first wave of these figures will come out December 2017 and will cost 4,104 yen for a full case and each case will contain 10 figures per box. The first assortment will consist of the previously revealed Shishi Red, Shishi Red Orion, and Houou Soldier. 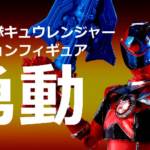 In case you missed it, Bandai announced that a line of Sodo-styled figures for Uchuu Sentai Kyuranger is coming down the pipeline. Bandai’s official Candy Toy blog been updated with our first look at this exciting new line of articulated toys.

Three figures have since been revealed; the previously announced Shishi Red now in color along with Shishi Red Orion and Houhou Soldier.

Unfortunately, no release info’s been given for these figures as they still appear to be in development. We’ll bring you more info as it becomes available, in the mean time make sure join our discussion thread after the jump!