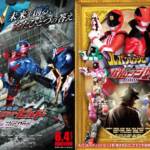 First up, in LupinRanger VS PatRanger En Film– LupinRed and Patren 1 must set aside their differences to work together after the remaining Rangers are captured by the Ganglers. Along the way, they will encounter legendary detective Herlock Sholmes and unlock a brand-new VS Vehicle– the Jackpot Striker!

Next, the adventure continues in Kamen Rider Build: Be The One! Surprisingly, this film takes place AFTER the events of Builds’ series- the Rider War has ended & the country is united under a new government. Unfortunately, this government triggers a BUILD ANNIHILATION PLAN and the once-venerated hero becomes a target of every citizen in the country. Aiding in this Annihilation Plan is a powerful new Rider- Kamen Rider Blood!

Both films are currently scheduled for release on August 4 2018!