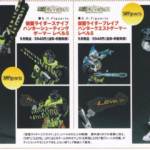 Two new Kamen Rider Ex-Aid Figuarts have just been announced as Tamashi Web shop exclusive releases, they are of course S.H.Figuarts  Kamen Rider Brave and Snipe once again this time in their Level 5 forms!

Both S.H.Figuarts will see a release in September 2017 with a price tag of 5940 yen before middleman fees and shipping. Both Figuarts will also include effect parts: Snipe will include a HIT! Effect while Brave will have a Level Up effect.