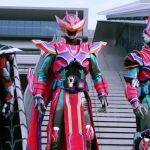 New Rider forms have been confirmed for this special-

Revice Forward: Kamen Rider Live & Evil & Demons is scheduled for release on May 10 2023!