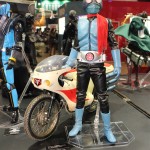 Yet another reveal’s come straight out of Winter Wonder Festival with a preview of Real Action Heroes Kamen Rider 1 and the Cyclone motorcycle having been just revealed.

While their currently is no word on when either of these two will be release, Wonder Festival did have something else for us with our first in hand look at RAH Genesis Ghost Ore Damashii being on display with the LEDs in full effect, having been teased sometime ago. Ghost himself is set for release in November 2016 with a price tag of 35,000 yen.