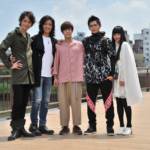 As time inches closer & closer to the premiere of the 20th Heisei-era Kamen Rider project Kamen Rider Zi-O, many fans have been wondering just how Toei would celebrate this momentous anniversary. While several characters from the series’ immediately before Zi-O were spotted filming, appearances from OLDER Rider shows has been a questionable factor.

*Kento Handa will resume his iconic role as the titular Kamen Rider Faiz
*Kouhei Murakami will take up the mantle of Kamen Rider Kaixa one more time.

The exact circumstances where these historic Riders meet up with new hero Zi-O are not known at time of writing. So be sure to join in our Official Zi-O Rumor Discussion Thread to share your thoughts and fears on this exciting new series!

And be sure to tune in September 2 2018 for the first episode of Kamen Rider Zi-O! 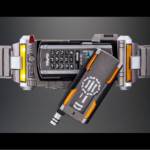 03/13/2017 is Kaixa Day! To celebrate, we have a double whammy reveal of both the Complete Selection Modification Kaixa Gear and Kaixa Driver.

Price and release info are still pending as of this article, in the meantime, we can enjoy the plethora of photos found by Twitter user@_Erasu.

P-Bandai just launched their pre order page for this product. The Complete Selection Kaixa Gear will retail for a rather hefty 48,600 yen and will ship out March 2018. 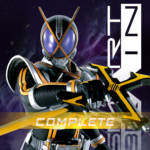 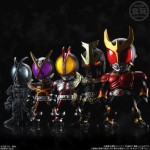 Bandai’s popular line of Converge chibi-style figurines will be expanding into the Kamen Rider series! Until recently, the line mostly covered chibified designs from the Gundam franchise.

and finally: The Arch Orphenoch.

These beautifully detailed figurines will see release sometime in February 2016 and  grabbing them as singles should cost you 500 yen per one figure.

For your viewing pleasure, early prototypes of some up coming Web exclusives are now on display at the Tamashi Nation’s show room in Akihabara, with photos courtesy of Cybergundam.

Now on display we have:

And last but not least: 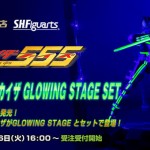 After the recent Kamen rider Faiz Glowing Stage Set a brief teaser had been shown featuring a possible second Glowing Stage release. Well it’s been confirmed now that none other than Kamen Rider Kaixa will be receiving the Glowing Stage treatment!

Painted in a UV reactive paint Kaixa (like Faiz) glows when the stage is turned on, replicating the suit effects from Kamen Rider Faiz. S.H. Figuarts Kaixa Glowing Stage will be a Tamashii Web Exclusive due for release in November for 6300 yen.

Be sure to check with your Web Exclusive middlemen for this unique piece!

The preview night of Bandai’s Tamashii Features Volume 6 is well under way and already we have some rather interesting reveals on our hands!

Our first real reveal of the event is a renewal version of Kamen Rider Kabuto, who is due out in 2014. This news comes hot on the heels of the Kamen Rider Black renewal that is due out later this year.

However the new Figuarts body is also on display at the event on a number of Rider stages, with one for every Heisei era Kamen Rider with the exception of Kamen Rider Wizard. While this could easily be a proof of concept display, it’s exciting nonetheless to see the first glimpses of what could become Kamen Rider Hibiki and Kamen Rider Kiva Figuarts!

Also included are some effect parts displays, a look at the various prototype stages the figures go through and a further look at the new glowing stage.

Keep checking Tokunation.com this weekend for more news from the event!

As the pictures start rolling in from Bandai’s 5th Anniversary Tamashii Nations event, online retailer Amiami have also begun extensive coverage via their Facebook page, as have hobby blog CyberGundam. On show are a variety of figures for the SH Figuarts line that should please both Kamen Rider and Super Sentai fans alike!

Among the displays was an extensive Kamen Rider Fourze setup, which featured all the figures release/to be released, including all 12 Zodiarts! The downside is, aside from Sagittarius all newly revealed Zodiarts look to be non-posable Figuarts Zero figures.

Next up is the “Legend of Masked Rider” display, which included Riderman, Tackle, Kamen Rider X, Apollo Geist and a Shocker Grunt among its ranks!

Also among the Kamen Rider displays is Blade, one of the highly-anticipated releases and an impressive Kamen Rider Faiz diorama including Kamen Rider Psyga!

The ENTIRE cast of Kamen Rider Ryuki is on display at the Festival, complete with Advent Beasts!

Rounding off the characters we have Kamen Rider Wizard in Flame, Land, Hurricane and Water styles!

Metal Hero furthers its transition to Figuarts with Gavan Type-G, Shaider and Sharivan on display!

Finally on the Super Sentai things we have the reappearance of the long awaited Tyranno Ranger/Mighty Morphin’ Red Ranger, who recently made his debut at New York Comic Con a few weeks ago. Topping off this reveal was probably the most anticipated Zyu team member, Figuarts DragonRanger!

Alongside this was also a Go-Busters display, however this did not include any newly announced figures. Finally, Akibaranger also added a few new figures to its ranks – as well as the previously revealed Malshina, Delu Knight and Aoi-tan were also seen!

Check out the full image gallery after the jump, and discuss other non-toku figuart reveals (including Sailor Moon, Code Geass and more) over at our dedicated discussion thread. Keep checking TokuNation.com for more updates from the event!