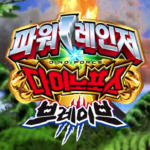 As we edge ever closer to the release of Power Rangers Dino Force Brave in South Korea the first Youtube review of its unique mecha has surfaced! 쿠라 KOORA brings us a look at the DX Brave Tyranno King toy (which will be renamed Kyoryuzin Brave in Japan). The mecha is a remould of the previously released DX Kyoryuzin, sporting a new colourscheme alongside new weapons for all three components. The video review also features a look at the toy’s electronics, which may be changed for the Japanese release.