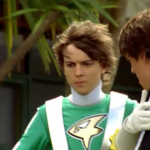 To celebrate the 20th Anniversary of the Power Rangers franchise, we here at TokuNation asked our members earlier this year to rank their Top 10 Power Rangers. In doing so, we took the compiled list of every single nomination, where they were ranked in each user’s list, and compiled all that information in to a master “Top 20 Power Rangers” list. As we wind down to the end of the calendar year, we’re revealing the remaining spots on our Top 20 Power Rangers of All Time list, created by the TokuNation fan base!

With that said, our next entrant in to the Top 20 was a bit of a surprise for me personally – I loved the character but was actually quite shocked to see him rank up as high as he did when all was said and done, beating out a vast majority of the more veteran and, because we’re nostalgic, maybe some more of the fan-loved characters from the original Saban era. Either way, I like it! The users of TokuNation have voted Milo Cawthorne, who played Ziggy Grover the Green Ranger from Power Rangers RPM as the 7th Best Power Ranger of All Time.

When the computer virus known as Venjix took over the computer systems and amassed an army to wipe out humanity, Ziggy Grover found himself inside the domed city of Corinth, humanity’s last stand. But when we first meet Ziggy, he’s alone in the wasteland and hitches a ride with Dillon back to Corinth. The mystery of why Ziggy was alone in the wasteland would play itself out later in the series. Not originally a Ranger, Ziggy is more of an ambassador of the Power Rangers, brought along as part of a deal that Dillon made to become the Black Ranger. When a mysterious woman auditions to become the Green Ranger, Ziggy volunteers to grab the morpher from Dr. K and bring it to the others. However the woman is actually Tenaya 7, an evil machine created by Venjix in hopes of infiltrating and destroying the Power Rangers from within. With Tenaya about to take the morpher, Ziggy does the only thing he can think of to keep the power out of the hands of evil – he bonds with the morpher, instantly morphing and permanently becoming the Green Power Ranger.

As the Green Ranger, Ziggy would continue his growth as a Power Ranger and as a vital member of the team. His crush on Dr. K, the mentor of the series, helps bring humor and lighthearted fun to what is actually quite a dreary story line (the end of the world, humanity on its last ropes, etc.). The character would continue to grow as we learn why he was outside of Corinth, and of course, the infamous episode where Ziggy hosts a behind-the-scenes look at filming Power Rangers RPM, albeit doing so completely in character.

The character known as Ziggy Grover is played by Milo Cawthorne, who was born in Whangarei, New Zealand. Having a love for the stage and acting, Milo performed in many local productions in his home town and managed to land roles on various children’s shows throughout his younger days. He even managed to perform at the Globe Theatre in London as part of the Young Shakespeare Company. Not being able to land anything steady, Milo delivered pizzas until he got his role in Power Rangers RPM. In 2011, Milo moved to the United States to further his acting careers. Milo has starred in smaller short films since his time on Power Rangers RPM. Earlier this year, Milo Cawthorne and Olivia Tennet (the actress who played Dr. K in Power Rangers RPM) finally tied the knot, making them the first on-screen/off-screen Power Rangers couple. For those curious, it has been stated that their relationship began prior to Power Rangers RPM, which probably makes the back-and-forth between Ziggy and Dr. K so natural on the show.

So there you have it! What do you think of this result? Let us know! We have some catching up to do, so expect a couple of entries to be revealed a day so we’re caught up before the year ends! Stay tuned late tonight/early tomorrow to see who our users voted as the 6th Best Power Ranger of All Time is!