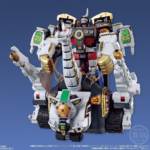 A few days ago, Super Minipla King Brachion(AKA: Titanus) made his grand debut at the All Japan Hobby Model Show, where Bandai announced that this bad boy will run you the astronomical price of 12,960 yen. Since his debut, pre orders for this massive beast of a model kit is set to begin, and with that pre-order some new details have been revealed that might explain why this costs as much as it does along with showcasing the impressive fully combined Ultra Zord mode.

A post from https://www.facebook.com/Tokullectibles]Tokullectibles mentions that it takes AA Batteries, from translating the pre-order page we can confirm that the kit will have electronics for some sort of motorized gimmick. None the less, pre-orders for Super Minipla King Brachion will begin October 5th, 2017 with a final shipping date of February 2018.