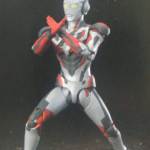 Bandai teased that an S.H.Figuarts Ultraman X was finally coming our way. Not long after that teaser, we finally have our first look at this figure in the recent batch of magazine scans that are making the rounds online.

S.H.Figuarts Ultraman X is set to be released in October 2018 with a price tag of 7,560 yen. For those of you whom may be unfamiliar with the character: Ultraman X has the power to create weapons and armor based on monsters or past Ultramen, and it looks as though this gimmick will be well represented in the figure itself! S.H.Figuarts Ultraman X will include parts that will allow you to swap off into his Cyber Gomora armor form.

There doesn’t seem to be a P-Bandai banner on this page, so at the moment it appears that he will be a mass retail release. Only time will tell if Bandai plans on releasing the other armor forms in the future and in what capacity.