It’s been a very long time coming but in 2015 UK Power Rangers fans will be spoilt for choice with the official announcement of a SECOND Power Rangers convention.

Among the first guest announcements are:

Full ticket information is available on the official website, but in the meantime fans can join in the discussion at our dedicated thread in the Conventions & Get Togethers section of the boards! 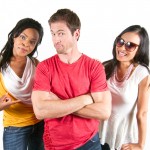 Some in the Power Rangers fan community were aware that three previous actors – Jason Faunt, Nakia Burrise, and Jessica Rey – had teamed together to be part of an internet series titled No Nerds Here. The first episode has premiered on YouTube!

The pilot episode has Jessica Rey coming to the realization that she’s not quite the star she believes she is, and her agent ends up booking her as a guest at a show titled CharacterCon celebrating the show she used to be on titled Mighty Rangers (an obviously play on Power Rangers … her season is even titled Wilderness Force, a play on Wild Force). The show is very similar to the once-popular show The Office, in which the camera cuts to one-on-one conversations with our actors periodically throughout the show.

All in all, the pilot episode was pretty entertaining, especially if you’ve gone to conventions and face-palmed at some of the questions that the guests are bombarded with, as the episode pays proper homage to those types of awkward situations. There’s even an implied website/message board/fan club feud between two different groups, in reference to the numerous communities dedicated to Power Rangers. Check it out below!

Please leave your thoughts on the pilot episode in our discussion thread! Are you looking forward to a second episode? Who would you like to see featured in it? Post your thoughts and discuss away! Congrats to the crew who put the episode together!