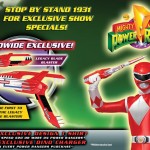 Like most roleplay toys in the Legacy line, it can play the original theme song by holding onto the firing button: