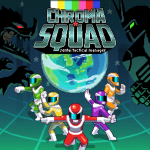 I’m pretty sure everyone remembers the incident from last year where the developers of the popular upcoming game Chroma Squad were in the midst of possibly being shut down by Saban Brands, the company behind our favorite Power Rangers franchise. After some behind the scenes work (we assume!), Behold Studios released a video announcing the release date of the game – you can play Chroma Squad when it releases on April 30th, 2015.

Chroma Squad was a Kickstarter campaign-funded PC game that allows you, the player, to create and manage your own studio production of a Super Sentai-esq television series. This means hiring a cast, creating suits, buying upgrades, filming battles, and yes – there’s even mech battles within the city that you get to create. This game has been highly anticipated for a long time and it’s great to see it coming out! Check out the release date announcement video below.

You can pre-order the game by going to ChromaSquad.com. The game will be available for PC and Mac, releasing through Steam. We’ve included some screen shots so you can decide if you’re interested or not! What do you think? Do you plan to pick up the game? Discuss!