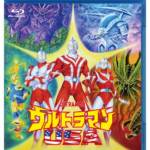 Tsuburaya Productions have announced that the next instalment in the Ultra Series to receive high-definition treatment will be none other than 1987 animated joint production with Hanna-Barbera, Ultraman: The Adventure Begins (also known as Ultraman USA).

After the stunt pilot trio “the Flying Angels” are caught in a mysterious flash of light, they become the hosts of three alien warriors  from Nebula M78. With a base inside of Mount Rushmore and assistance from a trio of robots, this new Ultra Force defend the planet from escaped monsters from the alien planet Sorkin. They are Scott Masterson (Ultraman Scott), Chuck Gavin (Ultraman Chuck) and Beth O’Brien (Ultraman Beth).

As as featuring a brand new Blu-ray conversion, this is the first time that the film has been made available since its original VHS releases. The Blu-Ray will feature both the 75-minute Japanese and 78-minute English cuts of the film, however at the time of writing there is no confirmation that the latter also features English audio.

Ultraman: The Adventure Begins will be released on September 26th 2018, for the price of 7800 yen. Stay tuned to Tokunation for more information on this release as it comes!