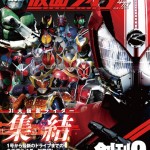 Magazine publishers Kodansha has a special treat for Kamen Rider fans, having recently announced a series of Official Mooks.

The Mooks will contain detailed information spanning both Heisei and Showa eras, the mooks will also cover all 798 Kaijins from the Heisei rea.

A total of 16 books will be released with two issues coming a month, each will retail for a wallet friendly 602 yen and will be printed in color with 52 pages in total Volume 0 has already been released.

An approrpriately themed Kamen Rider Binder will also be released that can house all the books.

The release schedual for the Mooks can be seen on the offical website for the project, make the jump here to see it.