It has been announced today via a press release that Saban Brands has reached an agreement with Nickelodeon to keep our spandex heroes on the kid’s network for another two years past the finale of Power Rangers Super Ninja Steel. The agreement should, if our assumptions are correct, carry the brand for the next series after Power Rangers Super Ninja Steel, which is heavily favored to be an adaptation of Uchu Sentai Kyuranger, which just finished airing in Japan.

While some fans will be skeptical at the continued partnership between Saban Brands and Nickelodeon – many fans blame the drop in the show’s quality on rumored Nickelodeon mandates – it at least guarantees that Power Rangers will live to see it’s 26th and 27th season.

What this means now, for the rest of us, is that a release of information on the 26th season of Power Rangers is imminent. Will we be flying through space with an Uchu Sentai Kyuranger adaptation? Or will we be calling upon animals, in some way shape or form, with an adaptation of Doubutsu Sentai Zyuohger? Stay tuned!

END_OF_DOCUMENT_TOKEN_TO_BE_REPLACED 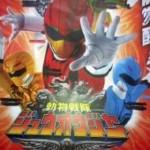 The themes for the next Super Sentai series Doubutsu Sentai Zyuohger are now available online in preview form! Check out 40 full seconds of the opening theme and the ending theme at the links below. Special thanks to Rangerboard.com member HikaruonR for the find!

What do you think? Join in the discussion! Don’t forget – you can live stream the premiere of Doubutsu Sentai Zyuohger on February 14th!