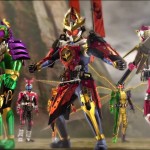 Kamen Rider Gaim Kiwami Arms and Shin Zangetsu have both been confirmed as DLC characters, much like WIzard Infinity and Beast Hyper from the last game.

Kiwami appears to play similar to Fourze: with the different Armored Rider weapons being worked into his combo attacks. Meanwhile, the trailer doesn’t make it clear if Shin zangetsu is Takatora or

Spoiler:
Miichi
behind the helmet.

Battle Ride War 2 will be hitting later this month for both Ps3 and Wii U consoles, the video demonstrating the two in action can be seen below: 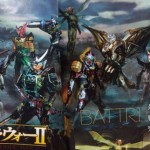 Kamen Rider Battle Ride War 2 debuts some new gameplay mechanichs and overall improvements to it’s predecessor, and here to demonstrate these changes we have the Kamen Rider Girls!

The video goes in depth at explaining the new Assist and Ultimate Form Change features, as always you can watch the video in the box below: 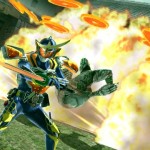 In less then a month, Kamen Rider BatlteRide War 2 will be hitting the shelves and yet another new preview trailer show cases the game’s plot, a new original villain created specifically for the game,the gameplay of Kamen Rider Gaim in addition to the Movie power ups, and a new feature that allows an Assist character to be added.

Further more, the trailer confirms that Tokugawa Yoshimune will be playable at some point in the game. Also confirmed via the trailer: the WizardXGaim Movie War will be one of the films covered in the game.

Special thanks to board member DrillBit for the headsup! As always, you can view the video below: 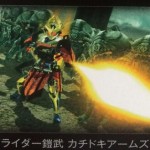 The latest scans are out for Kamen Rider Battle Ride War 2! In this latest update, the scans confirm that Kamen Rider Gaim’s latest form: Kachidoki Arms will in fact be playable.  The glowing aura that surrounds him suggests that Kachidoki could be Gaim’s special form that can only be used when a meter is filled completely.

In addition, we have three more actors that will be returning to reprise their characters in voice form: Musashi AKA Kamen Rider Caucasus from God Speed Love,  Hiroyuki Watanabe AKA , Kamen Rider Gaoh from the Ore Tanjou! film, and finally Takanoir Jinnai or  Kamen Rider Sorcerer: From Wizard in Magic Land.

While this doesn’t exactly confirm it, the addition of Gaoh suggests that Den-O’s Wing Form should be playable.
Kamen Rider Battle Ride War 2 will be available for both PS3 and WiiU consoles.