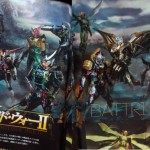 Bandai Namco games has announced that a sequel to last year’s Dynasty Warriors-esque video game: Kamen Rider Battle Ride War will be coming out in June.

According to an article by Silconera, the game will feature characters and forms from various Kamen Riders movies at least up to Kamen Rider Wizard In Magic Land. Mitsuru Matsuoka is returning to voice Kamen Rider Eternal.

new scans have confirmed that Kamen Rider Gaim made the cut, as did Baron! Baron has Mango arms and Gaim seems to have everything up to Jimba Lemon.

In addition, the movie Power Ups for the past riders will be playable: Fourze will have Nadeshiko Meteor Fusion, OOO will have Super TaToBa, and Wizard will have Infinity All Dragon.