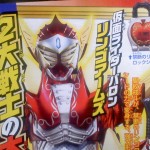 More images from the recently announced Gaim Gaiden project have surfaced from 2chn revealing a pair of new Armored Riders that will be debuting in the V Cinema in addition to two new forms for Baron and Zangetsu!

First off, the Apple lock seed will be returning this time in the form of Taboo. The Taboo Lock Seed will be utilized by Kamen Rider Baron to give birth to Taboo Arms but it seems that the seed will also be utlized by a new Armored Rider: Eden.

On the Zangetsu side, we have the Proto-10 Lock Seed which seems to be based on the Sukia(Watermelon Arms) Seed! The most significant change here is the addition of a gating gun to the Melon Defender. The 2nd New Rider is Kamen Rider Hades whom appears to be using the Dragon Fruit Energy Lock Seed that appeared in Movie War Full Throttle.

What do you think of these new forms? Looking forward to the V Cinema? Discuss in the thread after the jump.