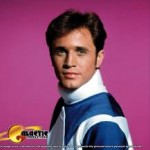 The celebration of the 20th Anniversary of Power Rangers continues! The users of the TokuNation forums listed their Top 10 Power Rangers and we compiled all their nominations in to a giant list and picked the Top 20, and now, we present to you the TokuNation Users’ Top 20 Power Rangers of All Time! And as we get closer to #1, it shouldn’t be surprising to see more of the original cast make their presence felt. With that, TokuNation users have voted David Yost, who played Billy Cranston the Blue Ranger in Mighty Morphin Power Rangers, as the 6th Best Power Ranger of All Time!

Billy started off as, honestly, a really big nerd. He had the super thick glasses, the rather cowardice persona (especially in battle), and spoke using really big, giant words. As the show and his character progressed, he would lose the glasses, lose the suspenders, and become quite an accomplished martial artist in the show (he even had more love interests than Zack, Jason, Rocky, or Adam). He created the communicators, allowing the Power Rangers to stay in touch with Zordon. He created the Rad Bug as a means to travel great distances when teleportation wasn’t available (whatever happened to that anyway?).

During the third season of Mighty Morphin Power Rangers, the evil Master Vile turned back time causing our heroes to become children. No longer able to morph in to battle, Billy figures out a way to use the Ninja Power Coins to revert the Rangers back to their adult selves. But before he can use the technique on anyone other than himself, the villains manage to destroy the coins, leaving the Power Rangers without any power (and they were still children). The only other way to save the world was to go back through time and recollect the pieces of the Zeo Crystal, which was shattered and sent through time and space to keep Lord Zedd from using the power for his own purposes. With the help of Billy and the Mighty Morphin Alien Rangers of Aquatar, the Zeo Crystal was reunited and the Power Rangers Zeo were born.

However, Billy chose to take on a mentor role, giving his crystal (that’s the quote!) to Tanya, who became Zeo Ranger II, Yellow. When the mysterious Gold Ranger appeared, the others suspected that Billy may actually be him. Much to the disdain of kids everywhere, despite all the obvious hints that it was, the Gold Ranger turned out to be an alien, and eventually the powers went to Jason, the original Mighty Morphin Red Ranger. The after-effects of the “turn you back in to an adult” experiment that Billy did ended up backfiring, as he began to age uncontrollably. Special water was brought from Aquatar to try and stop the process, but it wasn’t enough … he would have to go back to Aquatar for treatment. After he got there, he announced he had fallen in love, and was not returning. And thus, the Age of Billy came to an end.

David Yost is the actor who played Billy Cranston. He was born in Council Bluffs, Iowa (Iowa natives represent!) and landed his first major role in Mighty Morphin Power Rangers. For many years fans speculated why David Yost left Power Rangers Zeo as the final two episodes with him had his character played by an old man and a horrible voice dub with static, previously-recorded footage in the final scene. In 2012, David Yost broke his silence with an interview stating that he was gay and that he left the show because of the constant harassment from the production staff nearly drove him to be suicidal. A former production member of Mighty Morphin Power Rangers/Power Rangers Zeo chimed in very briefly that David was selfish and left the show after not being offered “Power Ranger money” for a non-Power Ranger role, which his character had developed in to. Whatever the case may be, the Power Rangers franchise lost a great piece the day David Yost left the show. David has gotten in to production, with his last big project being a segment producer on the show The Real Housewives of Beverly Hills.

David Yost was offered a chance to return for the anniversary episode of Power Rangers Super Megaforce, but declined citing the non-personal invitation (the letter started “Dear Power Ranger”) as well as horrible grammar throughout. A later statement hinted that a number of individuals involved with the show when he left were back with the show again, leading to the assumption that he had no desire to reunite with those that tormented him in his youth.

For those wanting to see David Yost in 2014, there’s good news – he’s on the convention road! You can see him, as well as the entire cast of Mighty Morphin Power Rangers (exceptions being Thuy Trang -RIP-, and Jason Geiger/Austin St. John) at the next Lexington Comic Con. You can also see him at this summer’s Denver Comic Con, appearing with Walter Jones and Jason David Frank. TokuNation will be at both those shows – so we’ll see you there!

What are your thoughts on David Yost’s placement in our Top 20 Power Rangers of All Time? Should he be higher? Lower? Or is he right where he should be? Post your thoughts! And stay tuned for the next announcement on our placement, coming sooner than you think!!