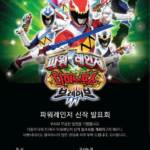 Zyuden Sentai Kyoryuger may have finished it’s run in Korea(which aired dubbed  under the Power Rangers Dino Force name) but with it’s success in that region, it seems that Korea is set to adapt it’s own second season and new series of stage shows.

New suits for the Rangers have been created, in addition there’ll be a new power up for Kyoryujin and production photos which came out last year reveal a modified Aigaron suit. Details on this new season are currently scares, so we have no clue if any of the original actors will be returning or if the production will be moving forward with it’s own cast.

Stay tuned, and Tokunation will provide more info on this as it becomes avalaible.

Thanks to an article posted by tokusatsunetwork.com, we now know that the title of this 12 episode series will be called Power Rangers Dino Force Brave, and it’ll be the first Korean Power Rangers adaptation.