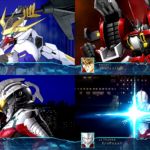 Bandai Namco’s Super Robot Wars 30 is launching in just a few short days, and already we’re getting announcements of newcomers entering the fray via a series of DLC Packs. Among these titles, the Ultraman series will be making its debut in this epic crossover series with the addition of Netflix Ultraman. In addition to Ultraman, DLC Pack 2 will add units from the Super Robot Wars Original Generation series as well as Mobile Suit Gundam Iron-Blooded Orphans.

Super Robot Wars 30 will be released on October 27, 2021. You can purchase the game via Steam here.