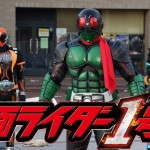 This time we also get to learn more of the story behind this new adventure: Takeshi Hongo has come out of retirement to rescue the granddaughter of an old friend. He will be joined by Kamen Rider Ghost and Kamen Rider Specter to take on the evil organization Shocker and its splinter group, Nova Shocker. 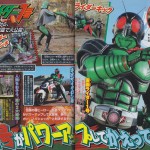 A teaser trailer for the upcoming anniversary project Superhero Year: Kamen Rider 1 has been posted online! The centerpiece of this teaser is Kamen Rider #1, Hiroshi Fujioka himself, performing the iconic Henshin! sequence.

According to recent interviews, Fujioka has been heavily involved with the pre-production of this new film, spending 5 months helping to develop the script. The films’ official head writer is Toshiki Inoue, a veteran of multiple tokusatsu projects. Meanwhile the film will be directed by Osamu Kaneda (whose resume includes both Superhero Taisen projects and Kamen Rider Gaim: Gaiden).

The revived Kamen Rider 1 premieres in theaters on March 26, 2016! Feel free to join in our Ongoing Discussion Thread to share your thoughts and fears about this exciting new movie!

Centerpiece of these new scans is a completely revamped design for Kamen Rider 1 featuring bulky new armor. In addition, the first Rider gets a brand-new motorcycle- the Neo Cyclone!

Furthermore, the scans confirm that original actor Hiroshi Fujioka will reprise his role as Kamen Rider 1! The film’s story involves the return of evil organization Shocker (now split into the original group feuding with a subset called Nova Shocker.) Both Kamen Rider Ghost and Kamen Rider Specter are seen fighting alongside Kamen Rider 1, but it is unknown at this time if other Riders will join the fight.

Superhero Year premieres on March 26, 2016! Stay tuned to Tokunation as we keep you up to date on all details for this exciting anniversary project! 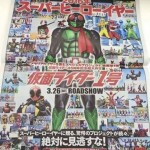 The next big Super Sentai & Kamen Rider teamup project has been revealed!

No plot details are available at this time, but the poster for this new film reveals a highly-revised new look for Kamen Rider 1. The upcoming Super Sentai team, Dobutsu Sentai Zyuohger is also featured prominently in the poster- meaning they should have a role in the film.