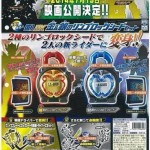 You knew it was only a matter of time before we finally got the apple as a Lockseed. Thanks to our friends at HeroTaku.com, we have an image for these upcoming Lockseeds. Along with the Lockseeds come new faceplates and shadowed Armored Riders, leading one to believe they are Lockseeds for two new Kamen Rider characters.