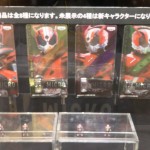 Revving up for the premiere of Kamen Rider Drive, Banpresto’s got some new reveals coming from Prize Fair 2014!

On display, we have samples of:

And finally, a DXF Figure of Drive due out sometime January 2015.