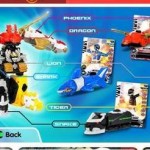 These figures will be hitting next week!   In addition, each Happy Meal will include one exclusive Action Card Game card per figure packed in with their respective Ranger’s Zord. 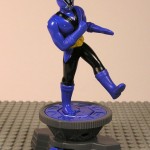 It’s a slow news day, but I caught this one over at RangerBoard and thought it should be shared with the masses, if anything, just for an eyebrow-raising read.

Apparently in Saudi Arabia, the McDonalds Happy Meal Samurai Blue Ranger toy stomps his foot on a disc (his Samurai Dragon Disc, mind you). And while no one can really confirm the validitiy of the claim (as none of us have the Saudi Arabia version of the figure), apparently the dragon symbols resemble the spelling of the prophet Muhammad. So when you trigger the toy’s action feature, the Blue Ranger smashes his foot down upon the name Muhammad, over and over again.

I got nothing for this one. Join in our discussion and see if the Blue Ranger hates Muhammad or if this is one of those coincedence stories.