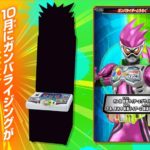 Bandai’s official Youtube page just released the first preview video to the up coming Kamen Rider Ex-Aid update to their Ganbarizing game, which not only adds new characters and cards to the roster but also changes the arcade machines themselves to accommodates the Gashats.

In addition to all these updates, the video shows Ex-Aid’s transformation sequence into his Action Gamer LV-2 form along with demonstrating noises from the Gamer Driver itself: