The Bandai Tamashii webstore has revealed a second entry into the GARO Makai Kadou line from the latest GARO series “The One Who Shines in the Darkness“. This time it’s the armor of Takeru Jakuzure – Flaming Sword Knight Zen!

The figure will be released in October and is priced 6090 yen. Check out the full sized images after the jump and this week’s episode of GARO for Zen’s debut on the show!

A new Garo series is upon us, and the merchandise was of course not far behind this fan-favorite toku franchise!

Ryuga’s Garo figure will cost 6090 yen and ship in September. 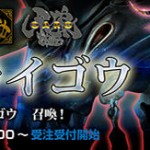