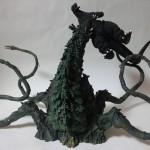 Just last week, Godzilla fans and MonsterArts collectors were thrilled to see that the biggest, baddest rosebush on the planet was finally released in Japan in super-articulated form. In only one day, S.H. MonsterArts Biollante has already become the latest and greatest subject of many a 2chan image. Now, courtesy of YouTube user and Japanese toy collector bonorenosan, we have a moving-picture look at Biollante, showing off her box size, articulation, ability to rotate on a motorized stand, and light-up core!

S.H. MonsterArts Biollante is expected to ship in North America courtesy of Bluefin in December at a daikaiju-sized retail price of $229.99 and has been available for preorder at numerous retailers, including our friends at BigBadToyStore.

Check out the video and numerous fun photos from our friends in Japan, then let us know if you’re getting a piece of this plant monster for yourself!

Super Sentai Figuarts aren’t the only new reveals in the latest release of Figure-Oh magazine scans!

First up is the third retail release in the S.H. Figuarts Kamen Rider Blade series, Kamen Rider Garren & Red Rhombus! Set for release in January and retailing for 8400 yen, this set marks the first time a Figuarts Rider is bundled together with his bike. For the time being, there is no known way to purchase either Garren or Red Rhombus separately.

Next, one step closer to completing the Kamen Rider 555 Riders, we have Kamen Rider Psyga as a Tamashii Web release in February 2014 for 4200 yen. The English-speaking Rider from the Paradise Lost film is complete with his Flying Attacker, Tonfa Edges, and other gear.

Thankfully, all the Garren fans out there will be able to seek him out from the usual Japanese retailers and presumably Bluefin-supplied retailers in North America, but Psyga fans will need to contact the middleman service of their choice once the Tamashii Web listing opens!

Straight out of the summer Wonder Festival, Tamashii Nations had an unprecedented presence at the event this year! The event is chock-full of incredible off-topic reveals, but of relevance to us is the pair of brand-new S.H. MonsterArts figures never previously seen!

Next year will bring the arrival of a new Godzilla as he appears in the film Godzilla 2000, and Mothra in her Heisei incarnation from the 1992 film Godzilla vs. Mothra!

No price points or release dates are currently available, but we fully anticipate more details to come as well as the inevitable Bluefin confirmation!

It seems that the reveals contained in the S.H. Figuarts Collection Book released this week are not over! Courtesy of Cybergundam, we now have our first look at the next Tamashii Web exclusive – Kamen Rider 2 in his original costume, complete with the coveted black helmet!

This version of Rider 2 ships in December and will retail for 2940 yen. It is expected that he will join fellow December exclusive Rider Blade King Form within the month.

There is no word yet on how or if at all there will be a release of the final major Rider 2 variant, primarily used in later appearances, sharing the suit and red boots and gloves of New Rider 2 but has a similarly black helmet. If there is, you’ll be sure to hear about it here at TokuNation.com!

UPDATE:We now have a new image, this time from Figure-Oh magazine. Kiryu will include a red-eyed berserk head, chest flaps that open to reveal the Absolute Zero Cannon, leg thrusters, and what looks to be an incredibly articulated tail! Thanks to our friends at The Daytime Ninja for the heads-up!

Did you think Bandai had really forgotten about the King of the Monsters, Godzilla? Worried about the state of the S.H. MonsterArts toyline? Not anymore!

Among this month’s crop of leaked Hobby Japan scans is this single image depicting the Millenium incarnation of MechaGodzilla, also known as Kiryu!

Kiryu is in his first appearance from the 2002 film Godzilla Against MechaGodzilla and will be a standard release for September. This Godzilla-powered cyborg retails for 10,290 yen, standing 15.5 cm or just over six inches tall. We have no details on accessories and alternate pieces yet, but fans will be happy to know that unlike the Heisei MechaGodzilla and Garuda, Kiryu’s weapons/jetpack is already included!

More details and a confirmation of release from North American licensed importer Bluefin are inevitable, so stay tuned!

As reported here just two days ago, Tamashii Web have made it official and listed S.H. Figuarts exclusives of Kamen Rider Stronger Charge Up and Electro-Wave Human Tackle as well as both versions of Ultra-Act Ultraman Jonias in animated and live action forms!

Ultraman Jonias and Ultraman Jonias Anime Color Version are both released in October and will cost 4410 yen each. Each version of Jonias includes three pairs of alternate hands, two effects parts, and two replacement star symbols. It’s currently unclear due to a lack of images whether the effects will be identical between versions or may differ in color and appearance.

Are you ready for this latest onslaught of exclusives? Maybe you’re waiting for a sign of the exclusive S.H. Figuarts White Wizard instead? Stay tuned to TokuNation for your toku toy news!

Thanks to the recent Tamashii Web update (for the off-topic Daft Punk S.H. Figuarts), although currently not open for preorder, four upcoming exclusive releases are now known to be coming in October!

While obviously price and accessories are not entirely known to us, these images give us some idea of what to expect! First up are two S.H. Figuarts, of Kamen Rider Stronger in his Charge Up form, and the Electro-Wave Human Tackle, ally to Stronger!

Our other two reveals are both Ultra-Act figures, both of the same character. They are THE☆ULTRAMAN, also known as Ultraman Jonias! Jonias is unique in that he was first an animated Ultra, only to appear in cameos and among the live-action pantheon later. These two exclusives give Ultraman collectors the choice of the expected red-and-silver appearance, or the animated incarnation’s more striking solid white in place of the metallic silver.

Not being officially revealed, please note that all information is subject to change. Look for the official confirmation of these figures, and an update from TokuNation, in the coming days or weeks!

SOURCE: Premium Bandai, Cybergundam Blog and others, and the anonymous image-grabber!

A new Garo series is upon us, and the merchandise was of course not far behind this fan-favorite toku franchise!

Ryuga’s Garo figure will cost 6090 yen and ship in September.

It’s been several years since the Ultraman franchise’s card-based video game Daikaiju Battle has had a presence in Japan, while its successors Ganbaride and Dice-Oh have kept the Japanese kids and kids-at-heart preoccupied, but thanks to our friends at Rising Sun Tokusatsu, we know that’s about to change!

Daikaiju Battle Rush: Ultra Frontier is the latest card series for the game franchise, started in 2007, and should be launching in Japan shortly! Details on Daikaiju Battle Rush’s game system are unavailable, but the new eye-catching format with the giant monitor play area looks neat! I know I’d love to pull out my favorite Ultra monsters in card form to play it in person! How about you? Join TokuNation.com‘s discussion and let us know!

Have you ever wanted to build your own monster? Maybe you’re jonesing for more modular toylines like Mugenbine, or you really want to try the HoneHone Saurs toys but the good ones sell out too fast? Or maybe you want a unique new Ultraman toyline to collect?

Never fear, Ultra Bone is here! Ultra Bone is a Bandai minifigure line, sold as boxed candy toys and capsule Gashapon releases, of famous Ultra monsters as skeletons, using a modular ball-and-socket design to mix-and-match pieces or build your own crazy creature. As an added incentive to “catch ’em all” each Ultra Bone figure has a chase black-skeleton variant on top of the standard bone-colored (naturally!) release.

Series 1 of the candy toys have already been released, and the first Gashapon series is expected later this month. Check out images of the first sets of figures, Bandai Japan’s TV spots from YouTube, video review courtesy of bonorenosan and maybe show off your own creations by checking our discussion thread!