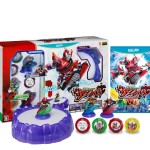 This new video demonstrates just how exactly the Ride FIgures work in tandem with the different kind of Chips, along with giving us a glimpse at the gameplay which is very reminiscent of the Skylanders franchise:

The game will be released on the PS3 and Wii U December 4th 2014 in a big set that includes a Ride Gate, three Ride Figures(Drive, Gaim, Wizard) , and four Ride Chips(Kachidoki Arms, Shin Zangetsu, Wizard All Dragon, and a mystery Chip) all for 8,550 yen.

Due note that the Wii U is region locked and thus Summon Ride will not work on consoles released outside of Japan. For the majority of us that will be importing this game, the region-free PS3 is the way to go.