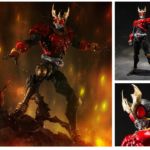 Bandai Japan is holding a contest to let fans decide the next entry in the Superior Imaginative Colosseum figure series!

The candidates in question are four Kamen Riders never before seen in the SIC format:


A concept figure has been revealed for each candidate, recreating their signature abilities in the heavily-stylized SIC format.

Voting is NOW OPEN (but will require a Bandai Namco ID to process and will run until April 16 2019.

The winner will be announced April 23, 2019! Stay tuned to TokuNation for further details!