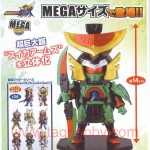 If the DX Watermelon Arms seems out of reach to you, Banpresto’s revealed a perfect substitute.

While it might not transform or have much in the way of articulation, Banpresto did reveal that they will be making a Suika Arms to go with their super deformed WFC line.

Price and Release dates will be announced at a later date, but we do know that the figure will stand 14mm tall to be properly in scale with the rest of the figure waves.